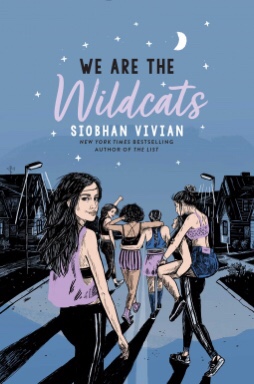 **Disclaimer: I received a free early reader’s copy of We Are the Wildcats by Siobhan Vivian through NetGalley in exchange for an honest review. Thank you to them and the publisher for this opportunity.

We Are the Wildcats by Siobhan Vivian is a young adult contemporary novel about a high school girl’s field hockey team. It is multi point of view and you get the perspectives of a variety of girls on the varsity team at West Essex high school. We Are the Wildcats publishes on March 31st. I rated it 5 stars on Goodreads.

A toxic coach finds himself outplayed by the high school girls on his team in this deeply suspenseful novel, which unspools over twenty-four hours through six diverse perspectives.
Tomorrow, the Wildcat varsity field hockey squad will play the first game of their new season. But at tonight’s team sleepover, the girls are all about forging the bonds of trust, loyalty, and friendship necessary to win.
Everything hinges on the midnight initiation ceremony—a beloved tradition and the only facet of being a Wildcat that the girls control. Until now.
Coach—a handsome former college player revered and feared in equal measure—changes the plan and spins his team on a new adventure. One where they take a rival team’s mascot for a joyride, crash a party in their pajamas, break into the high school for the perfect picture.
But as the girls slip out of their comfort zone, so do some long-held secrets. And just how far they’re willing to go for their team takes them all—especially Coach—by surprise.
A testament to the strength and resilience of modern teenage girls, We Are the Wildcats will have readers cheering.

When I picked up this book, I didn’t know anything about it. I had seen the cover before and was admittedly intrigued by the title because it gave me High School Musical vibes. Then I read the summary and I was even more interested. That being said, by the time I actually got around to reading the book, I had zero expectations about what this book was going to be like. I was pretty impressed by this book.

The whole premise of this book is this group of very different girls coming together to bond as a team and become friends. They have to overcome a variety of problems to do this, and they go on some crazy adventures along the way. My favourite part of this book is the dynamic between the girls and the way that they grow and change over the course of one night. They had a lot to learn about themselves and each other, and it was really interesting to watch them do that. It was also really cool to read from all the different girls points of view. I really enjoyed each of their perspectives.

The writing style of this book felt really unique to me. I can’t quite put a finger on it to describe it, but the way it opened was really fascinating. Then it jumped into all the different points of view. I felt it was really well done in how the book was structured and I felt the more neutral way it opened set the stage really well.

To get a little bit spoilery, the major antagonist of this is the coach, but it’s not totally obvious at first. When I started reading it, the way she described the coach made me really uncomfortable as an educator and I didn’t really like how all the girls were talking about him, especially Mel. Mel later admits to being in love with him, which is especially problematic in the greater scheme of things. Then the more you read about the coach and the more you see how he’s manipulating each and every one of these girls, the more you realize how insidious and awful he is. It’s a subtle reveal over the course of the novel and as a reader you want them to figure it out and get out from his thumb. These girls can do so much better. Of course, I don’t want to ruin the ending for you.

The writing style can take a bit to get into, but on the whole I really loved this book and the characters. I highly recommend you check it out when it releases on March 31st.

Thanks you again to the publisher and NetGalley for this opportunity.